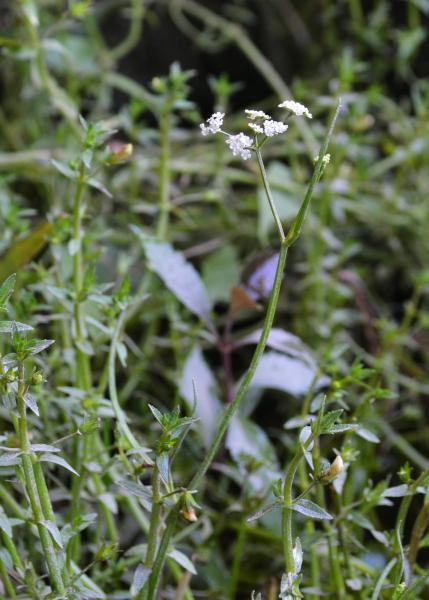 How is it doing?
This wildflower, which looks a bit like a small Queen Anne’s Lace with white flowers and quill-like leaves, is globally imperiled (G2), and critically imperiled (S1) in seven U.S. states. It is listed as endangered under the U.S. Endangered Species Act.

Where is it found?
Approximately 45 occurrences are believed to exist in scattered places in Alabama, Georgia, Maryland, North Carolina, South Carolina, Virginia, and West Virginia, and in the Ouachita Mountains of Arkansas.

Why is it at risk?
Harperella populations face many threats. The plant is vulnerable to changes in water from stream dredging, dam building, and reservoirs; pollution and erosion from development, poor management of logging and agriculture, and road building; and disturbance and trampling from ATVs, foot traffic, heavy equipment, and debris build-up.

The Oklahoma Natural Heritage Inventory—the Sooner state’s member of the NatureServe network (http://oknaturalheritage.ou.edu)—recently documented the first occurrence of Harperella in the state. The population was found along a river in the southeastern part of the Oklahoma and included two stands of approximately 500 plants.