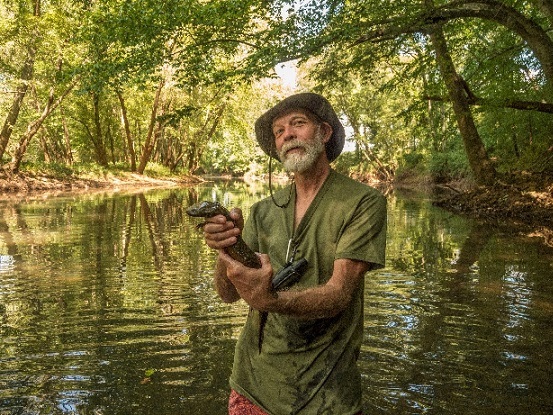 James Godwin defines ‘challenge’ a little differently than the average person. “I have to be aware of hornet’s nests, venomous snakes – to me that’s not a challenge, that’s just a part of being out there.” Bouncing over a dirt road, he drives a truck with carefully balanced canoes rattling in their straps overhead. Unsure of what the day has in store, he ventures onto private property owned by a friend of a friend in rural Alabama. This is the only way to gain access to Butler Creek. “Butler Creek is a stream that no one has really spent much time on.” Shutting the truck door behind him, Godwin welcomes the summer heat and humidity. Just a typical day at work.

He makes a beeline for the creek and eagerly sticks his head underwater. Peering under rocks, he glides his hands into crevices without hesitation. Upon resurfacing, he peels a leech off his skin – “for some people that might be a challenge,” he chuckles, “but I don’t really think about that.”

James Godwin is an aquatic zoologist at the NatureServe Network’s Alabama Natural Heritage Program. For 24 years, he has conducted fieldwork on Alabama’s rare species and has contributed data to NatureServe. Now, Godwin leads a pack of scientists from the Alabama Department of Conservation and Natural Resources deep into the rural areas of the northern part of the state. They are hunting for the hellbender.

The hellbender – the largest salamander in North America, up to 29 inches long– is elusive. With slimy brown skin, a flat body, and a mouth so wide it can eat a myriad of aquatic animals, the hellbender sounds like a creature from the black lagoon.

In reality, it is more like a canary in a coal mine. This salamander serves as a litmus test for water quality because it can only be found in cool, clean water. With thousands of capillaries on its body, the hellbender breathes through its skin. When the water is pure, the hellbender survives. Unfortunately, water quality is declining all along the east coast due to unsustainable deforestation and development practices that cause debris to run off into streams. In response, hellbender and prey populations have drastically decreased. In Alabama, the hellbender was thought to be nearly gone. But Godwin thinks otherwise.

Downstream, Godwin collects water samples for environmental DNA (eDNA) analysis. eDNA is DNA collected from a source other than the actual organism. This allows Godwin to identify all organisms potentially in that body of water. 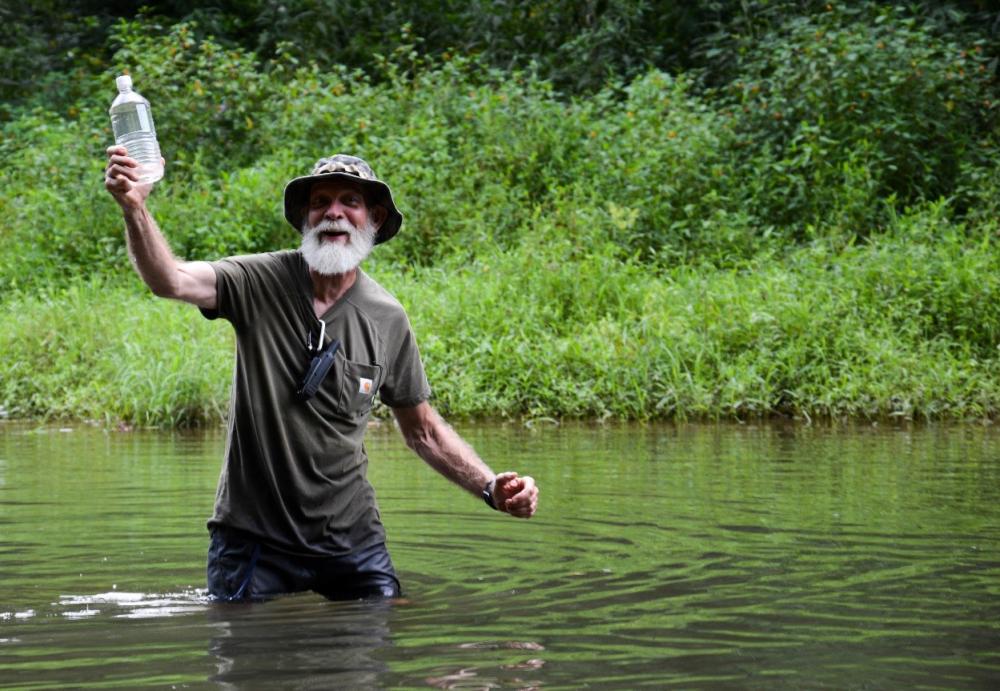 Meanwhile, he sees snorkel spouts bob along the surface as his team members peruse the waters underneath for any sign of a hellbender. The team is optimistic because Butler Creek has ideal conditions for the creature’s survival.

Before there is even time to lose hope, a scientist’s head pops out of the water. They’ve spotted a hellbender under a rock crevice! Godwin and the others can hardly contain their excitement as they carefully wade over to the spot so as not to stir up dirt and spook the animal. They each take turns plunging into the clear water with a flashlight to peek at the elusive creature. Only the face is visible, but “there was no mistake that it was a hellbender. It looks like nothing else.” Once everyone has gotten a good look, they leave the critter and its habitat undisturbed. Mission accomplished.

The discovery and continued survival of the hellbender is motivation to maintain clean American waterways, which will help aquatic organisms and humans too. “The need for good water quality links us all together,” says Godwin. “The challenge is that once we collect this information, how to work with groups or agencies that have an interest and would want to implement hellbender conservation.” To help overcome this challenge, the Alabama Natural Heritage Program contributes cutting-edge data to the NatureServe Network. This powerful partnership unites scientific work with conservation groups to make sure that Godwin’s work, and the hellbender, do not go unnoticed, but instead, that science is applied in the service of nature.