Scientists from NatureServe member Instituto Biótropicos recorded the first ever sighting of a black-colored Maned Wolf in Brazil. This observation gives us a rare opportunity to study evolutionary adaptation in the wild. 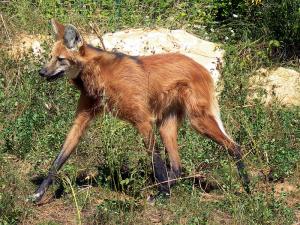 A first ever record of a black colored Maned Wolf, Chrysocyon brachyurus, was made in northern Minas Gerais state, Brazil. This individual was caught on camera traps in a protected area in the Brazilian cerrado, a tropical savanna region. A total of 30 images of the Maned Wolf were taken, 25 in its common reddish color and five in the previously unseen black coloration.

Coloration in animals has obvious survival impacts. Concealment, communication, temperature distribution, and mate attraction are some of them. Due to genetic mutations and developmental processes, variations in coloration show themselves from time to time. Some of these variations can be minute and subtle, such as a slightly darker color while others, such as the black coloration of the Maned Wolf, are much more obvious. If this new coloration provides some kind of evolutionary benefit we would expect to see it become more common in the population, perhaps even one day becoming the dominant coloration. If the black coloration is detrimental to the species’ survival and reproduction it will probably not remain for long. 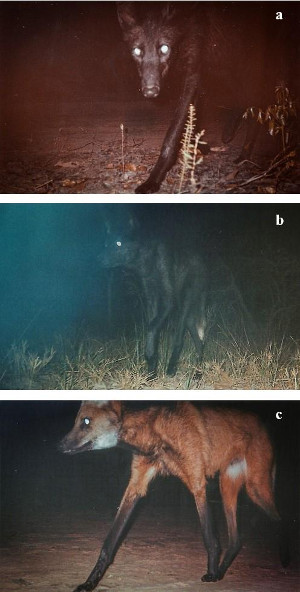 Classified as 'Near Threatened', the Maned Wolf is a rather solitary canid that inhabits grasslands and savannas in central South America. The species has a unique appearance, a distinctive reddish coat, slender and tall body, short tail, and long legs and ears. The Maned Wolf's coloration is so characteristic of this species that its Latin name, Chrysocyon, means ‘golden dog’.

Hunting is an important activity for the Maned Wolf as 50% if its diet is composed of rodents, armadillos, and birds. Anything that gives an individual an advantage when hunting prey could enhance that individual’s chances for survival and reproduction, passing that new trait down to its descendants. While there are many factors to consider, a dark coat could give this individual an advantage when hunting at night since this individual might be more inconspicuous against a dark background than the typical reddish coloration.

The black Maned Wolf in the photographs is a healthy adult. The black coat apparently did not prevent this wolf from reaching adulthood. Whether the black color has helped or hindered the animal's survival and mating success is unknown. What we do know, however, is that we’ve been presented with a rare opportunity to study evolutionary adaptation in the wild.