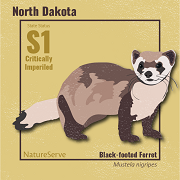 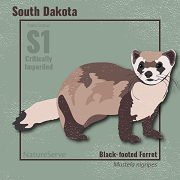 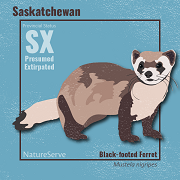 The black-footed ferret is a charismatic and sly mustelid that once ranged broadly across the grasslands of west-central North America from southern Canada to northern Mexico. But today, due to numerous threats including the eradication of prey species, no self-sustaining wild populations of the widely recognized black-footed ferret remain. Fortunately, though, this endangered species is slowly making a comeback thanks to careful reintroduction programs and increased awareness of its plight.

Because of this specialization, black-footed ferret populations could not resist the widespread decline of prairie dog populations during the 20th century. Over many decades, the government assisted ranchers who consider prairie dogs pests in eradicating them across vast areas. Their grassland habitats have been degraded, destroyed, and replaced by human developments, croplands, and pasture. And sylvatic plague, which occurs frequently in wild rodents, has killed entire prairie dog colonies since the mid-1940s. For the black-footed ferret, the decline of their prey species led to virtual extermination in the wild by 1987, when some of the last remaining wild individuals were captured for captive breeding to save the species from extinction.

Although prairie dog populations have stabilized as their habitat has stopped declining, the black-footed ferret remains critically imperiled, with no self-sustaining populations persisting in the wild. Thanks to captive breeding programs, however, there are 30 reintroduction sites across the ferret’s historical range in North America, many of which have been successful. Seven of these sites are in South Dakota, where approximately 150 ferrets live in the wild today. NatureServe network programs play an active role in advising and monitoring these reintroduction programs.

The black-footed ferret faces a long road to recovery ahead. In Canada, where the ferret is protected under the Species at Risk Act, the recovery goal is to establish a wild population with an 80% probability of persisting for 20 years. In the United States, where the ferret is protected under the Endangered Species Act, the downlisting recovery goal is to establish 1,500 breeding adult individuals in the wild and 10 populations in 50% of the states that make up its historical range. Before the black-footed ferret can be delisted entirely, the number of breeding adult individuals must reach 3,000.

An important factor in reaching these goals will be protecting and restoring ecosystem connectivity in the grassland habitats the ferrets depend on. NatureServe ecologists recently identified Grassland Potential Conservation Areas where targeted conservation efforts will make the most impact for at-risk plant and animal species, including the black-footed ferret. With continued monitoring and restoration of grassland ecosystems, reintroduction efforts, and protection in the wild, the black-footed ferret may once again roam the Great Plains from Canada south to Mexico. NatureServe is committed to maintaining and providing decision-makers with the most up-to-date, high-quality data about at-risk species and the ecosystems they depend on to save them from extinction. Support us today to help species like the black-footed ferret on their road to recovery.

See All Species at Risk Spotlights