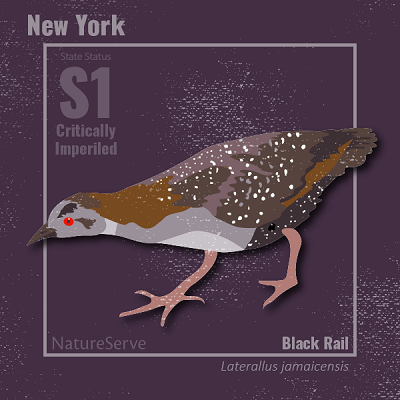 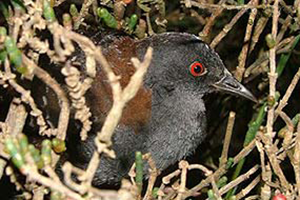 Many birdwatchers and ornithologists consider it a rare treat to spot black rails (Laterallus jamaicensis) in the wild—not because of distinctive or eye-catching physical characteristics, but because these tiny birds are so reclusive that they regularly evade even the most experienced birders. As the smallest member of the rail family that breeds in North America, the black rail shares its extremely secretive nature with other marsh birds, which prefer dense, inaccessible wetland habitats where they can move undetected by predators. Sighting black rails in the wild may become even more of a challenge as the species disappears from its historical range—data indicates that populations have declined as much as 75% in the last two decades alone, making it possibly the most endangered bird along the East Coast of North America.

Despite the black rail’s widespread range across North and South America, its populations are small, highly localized, and vulnerable because of specialized habitat requirements. Black rails make their homes primarily in salt marshes, freshwater marshes, and wet meadows, where dense, grass-like vegetation (e.g., rushes, sedges, grasses) provides cover from predators and shallow water conditions allow stealthy travel by foot. Where these habitats are protected, populations tend to be stable. Unfortunately, wetlands are among the most threatened habitats in the country due to coastal development, sea-level rise, and invasive species, placing the black rail in danger of further declines. 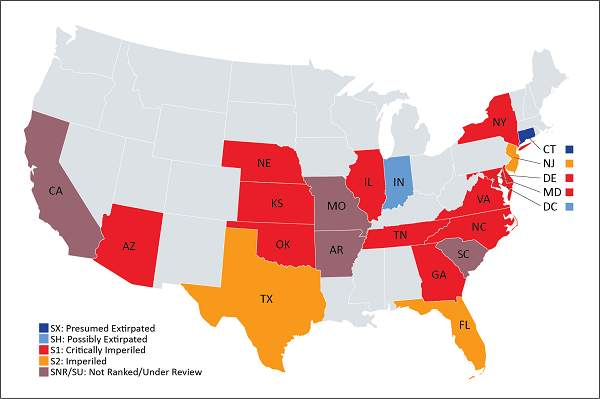 Black rails are vulnerable to the permanent loss of coastal wetlands because they are unlikely to find suitable habitat to disperse to in developed areas nearby. As wetlands have been drained, dredged, and filled to make room for growing farms and cities, over 50% of wetland acreage in the United States has been lost to agricultural and residential development. Climate change threatens the remaining wetlands further, as sea-level rise increasingly inundates and erodes them from the landscape. Additionally, invasive species are altering the native vegetation that is crucial to wetland communities, as phragmites (Phragmites australis) choke out spartina marsh grasses (Spartina alterniflora) and nutria (Myocastor coypus) forage on their roots, turning a rich ecosystem into an almost barren mudflat.

Being so reliant on marshy wetland habitats makes the black rail highly susceptible to extirpation (local extinction) in most states throughout its range. A single disastrous event, like flooding or a hurricane, can completely wipe out local populations, destroying nests and forcing the birds into the open 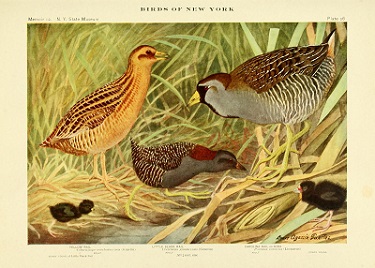 where they become easy prey. Already thought to be extirpated from parts of its range, the rail is critically imperiled in places like New York, where only a single known nesting location remains on the south shore of Long Island. Especially as climate change increases the frequency and severity of extreme weather events, black rails will be at higher risk of disappearing from the landscapes where they are already so rarely seen.

Currently, the eastern black rail (Laterallus jamaicensis jamaicensis), a subspecies of black rail ranging from eastern to central United States, is being considered for listing under the Endangered Species Act. Listing would benefit the bird in numerous ways: protection of critical habitat, development and implementation of a species recovery plan, and federal aid to state programs working on recovery. Any effective conservation strategy will need to incorporate the short- and long-term impacts of climate change on rails and their habitats. NatureServe tools provide valuable knowledge for understanding these risks. Our Climate Change Vulnerability Index (CCVI) and Habitat Climate Change Vulnerability Index (HCCVI) identify the plants, animals, and habitats that are most vulnerable to climate change, as well as the relative importance of the factors contributing to their vulnerability. Land management and natural resource professionals use these indices to translate research findings into actionable guidelines for recovery. In an era where over 1 million species worldwide are threatened with extinction, NatureServe data and tools are critical to protecting imperiled biodiversity from the growing threats posed by climate change.

See All Species at Risk Spotlights