Rising Seas and the Coquí Frog of Puerto Rico | NatureServe 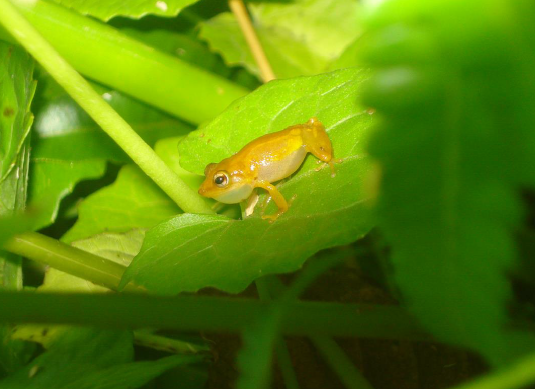 Known for its emblematic "ko-kee" call, coquí frogs are cherished throughout their native Puerto Rico. One of these species, Eleutherodactylus juanarivero, is only found in a small marsh near the island's northern coast. This is the remnant population of what was once a widely distributed marsh specialist whose habitat has been decimated by changes to land use and land cover following the island's Spanish settlements in the 16th century. Today, urban development and water contamination from nearby landfills threaten the wipe out the wetland habitat of E. juanariveroi. As a result, the IUCN has designated this species as critically endangered.

This presentation by Daniel Dávila Casanova of the University of Puerto Rico also factors in the threat posed by rising sea levels. Using a model for predicting the sea level's impact on marshes, Dávila shows how projected sea-level rises, coupled with changes in land use and land cover, will spell the gradual demise of this frog's only home. Dávila presented these and other findings at Biodiversity Without Boundaries 2014: