The Most Important Places to Conserve in the Andes-Amazon | NatureServe

The Eastern Andes and the Western Amazon Basin are recognized as one of the world’s most important areas for biodiversity richness and uniqueness. However, the region’s countries are under pressure to increase access to land and develop natural resources to support economic growth. These impacts increase the urgency of knowing which of the region’s many elements of biodiversity are irreplaceable, and which places in the region are most important to conserve. 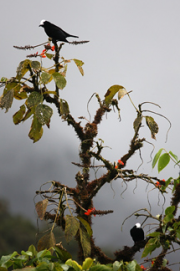 With funding from the John D. and Catherine T. MacArthur Foundation, NatureServe identified the most effective places to invest conservation resources in the region.

NatureServe scientists used biodiversity data to determine the irreplaceability of unprotected threatened plants, animals, and places. We then estimated a range of impacts over the next 20 years from infrastructure development (i.e., planned roads and mines), loss of freshwater connectivity caused by planned dam construction, and projected deforestation. Taken together, these analyses identified the most threatened places. Crucially, we looked at the costs of conserving these places, as well as the potential benefits from water and carbon resources.

The final results reveal places in the Andes-Amazon that harbor the most vulnerable elements of biodiversity, the greatest potential for ecosystem service benefits, and the least cost for implementing conservation actions.

“NatureServe’s analysis is a very important contribution to prioritizing and focusing resources in the region,” says Stephen Cornelius, MacArthur Program Officer in Conservation & Sustainable Development. “Conservation efforts will have a greater impact because of this work.”