When you picture hiking the Appalachian trail, images of lush, extensively forested mountains with scenic overlooks likely come to mind. One of the last things you would expect to find along a high section of the trail: a swamp. However, that is just what botanists Spider Barbour and Ted Elliman discovered in New York State in 2000 while working as contract botanists for the New York Natural Heritage Program (NYNHP). Not only is the 15-acre swamp a rare find in itself along high sections of the trail, but it is dominated by the Atlantic white cedar (Chamaecyparis thyoides), a particularly state-rare tree. 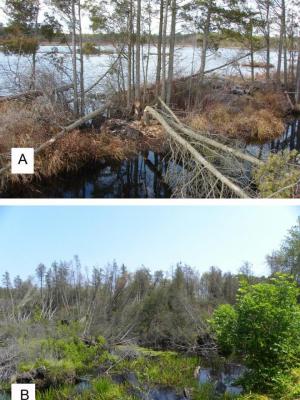 A year after the initial discovery, NYNHP Ecologists, Tim Howard and Greg Edinger, surveyed the swamp on the 1180-foot high section of Bellvale Mountain. They determined that it was, in fact, an excellent example of an inland Atlantic white cedar swamp. In New York, it is unusual to find such a large wetland high up on a mountain, let alone one dominated by a coastal-plain tree already rare in the state. These swamps are so rare that this inland Atlantic White Cedar Swamp is one of only five known to exist throughout New York State.

The Atlantic white cedar tree is prized for its high resistance to decay and its beautiful white wood. Unfortunately, the number and total acreage of inland Atlantic white cedar swamps in New York have declined in recent decades, chiefly due to increasing beaver flooding. When beavers cut down trees to build their dams and lodges, they often have a preference for a particular type of tree. What tree do the beavers of south-eastern NY seem to be fond of? Why, the Atlantic white cedar, of course! Over time, as the trees are damaged or removed, bushes and saplings will grow in the gaps where they once stood, slowly converting the cedar swamp to a shrub swamp or even a shallow emergent marsh. Although beaver flooding is a natural process, it is thinning out the remaining cedar population, and one swamp was lost altogether in the 1990s.

Other threats include excessive logging, invasive non-native plants, agricultural and residential development, their associated run-off (e.g., septic, silt, nutrients), and recreational overuse. These various manmade threats, combined with the natural beaver flooding process, have led to a significant decline. By how much, you might ask? A whopping 75% of this type of New York swampland has been lost. 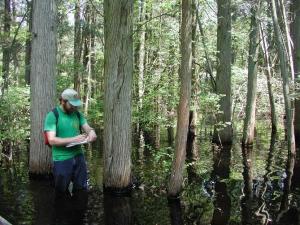 The Appalachian Trail is about 90 miles long in New York, passing through several state parks and providing access to large forested areas. Because of its significance to hikers and conservationists alike, the New York Natural Heritage Program, part of the NatureServe Network, and its partners have been completing surveys of the trail for many years. In recent years, the swamp at Bellvale Mountain was once again surveyed by NYNHP Chief Ecologist, Greg Edinger, as part of an accuracy assessment for the Vegetation Mapping Inventory Project for the Appalachian National Scenic Trail. Using computer mapping technology, this project has mapped out complex vegetation and ecological information for the region, which will support the management of the Appalachian National Scenic Trail’s natural resources.  Without the NYNHP’s classification of this swamp a decade earlier, based on Spider Barbour and Ted Elliman’s discovery, this threatened ecological resource would have remained unknown to park managers and would have gone unloved by amateur naturalists taking in the beautiful diversity of the Appalachian Trail.