Species at Risk on Department of Defense Installations | NatureServe 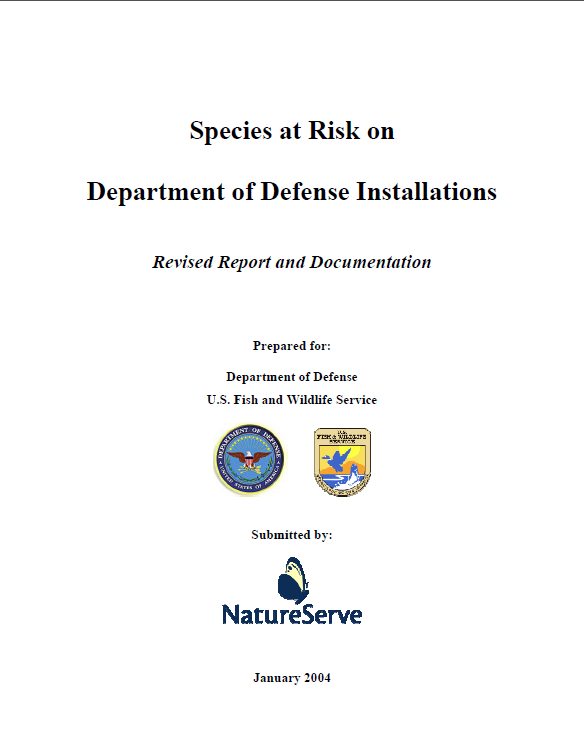 Department of Defense lands play an essential role in maintaining homeland security, and are also important for safeguarding the nation’s natural heritage. Managing DOD lands in a way that both supports military readiness and sustains ecological integrity requires an understanding of the species and ecosystems that are found on and around these bases. What species at risk are found on these military lands? On which installations are they most abundant? How can management of habitat on military lands help maintain these species and avoid the need for their listing under the Endangered Species Act? This report helps the Department of Defense to answer these important questions. Department of Defense lands are thought to support more federally listed species than any other major federal agency, and to harbor more imperiled species than lands managed by either the National Park Service or U.S. Fish and Wildlife Service (Groves et al. 2000a). Many military bases are located in biologically rich areas of the United States, including coastal areas where human development is a major threat to biodiversity. Some of these bases have become the last refuges of imperiled species habitat in rapidly urbanizing landscapes. Proactive conservation of imperiled species and their habitats on and around DOD installations can help preclude the need for federal listing, reduce recovery costs, and protect significant biological diversity, while enabling the services to continue providing high quality military training. NatureServe’s work under this project is intended to assist the military in focusing conservation efforts towards species that may warrant federal listing if population declines occur or continue. In this report we define species at risk as plant and animal species that are not yet federally listed as threatened or endangered under the Endangered Species Act, but that are either designated as candidates for listing or are regarded by NatureServe as critically imperiled or imperiled throughout their range. NatureServe provides two major types of analyses in the report: (1) analyses of species at risk that are highly dependent on DOD lands and management for their survival, and (2) analyses of installations with high numbers or densities of species at risk. These analyses aim to help DOD to direct resources towards both high priority species and high priority installations.