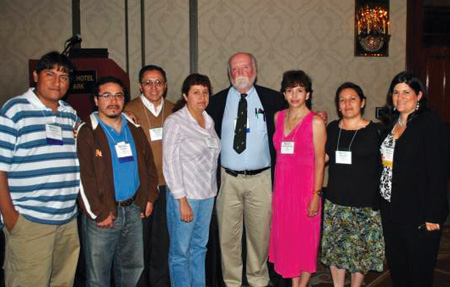 The founder of the natural heritage network, Robert E. Jenkins is the first recipient of the NatureServe Conservation Award, bestowed in 2010 in recognition of his innovation, creativity, and leadership in advancing science-based conservation.

“My original vision was simply to accumulate a knowledge base of constantly updated information about the biota and ecosystems as a basis for conservation action,” Jenkins said as he received the award at NatureServe’s Biodiversity Without Boundaries 2010 conference in Austin, Texas. “You can’t imagine how little we had to go on in 1970—essentially nothing demonstrably reliable existed as to accuracy, currency, or even underlying intent.”

As vice president for science at The Nature Conservancy (TNC) in the ’70s, ’80s, and early ’90s, Jenkins made that vision a reality. He transformed the methods by which TNC established priorities for protecting land and guided the creation of a biological inventory of the Americas, introducing heightened scientific rigor to TNC’s land-acquisition choices.

He created the foundations of natural heritage methodology: the concept of mapping plant and animal occurrences, the coarse filter/fine filter concept, and the multi-scale ranking system still used today by NatureServe and hundreds of partners. He guided the design and evolution of our database management systems, which won the 1993 Smithsonian-ComputerWorld award for outstanding contributions in the arena of natural resources.

In accepting the award, Jenkins recounted the history of the NatureServe network and reflected on its value. Watch Jenkins’ acceptance speech, or read the transript.

“I’m glad to receive the award, not for the honor, but because it is essentially for the invention of the methodology and the establishment of the public-private partnership that has made its deployment possible,” he said. “These are things of lasting importance.”

Jenkins’ innovative approach to conservation has withstood the test of time and application. His leadership and tireless efforts to forge an expansive network of programs that employ standard methodology has transformed conservation action, and will continue to provide reliable and relevant biodiversity information for generations to come.