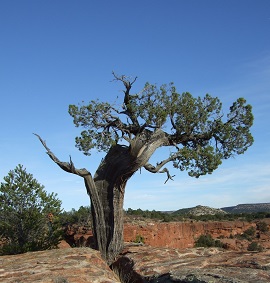 The NatureServe Network’s local Colorado Natural Heritage Program (CNHP) played a critical role in the conservation of a ranch that will conserve 50,000 acres in southeastern Colorado.

JE Canyon Ranch is located in an area noted as the largest and most intact prairie ecosystem left in the state, containing 19 rare species and 5 rare plant communities, as well as high quality native grasslands, pinyon-juniper woodlands and wetlands. Experts at CNHP documented the area’s rare species and ecological systems and highlighted its conservation value, which ultimately led to The Nature Conservancy’s (TNC) purchase of the land in 2015.

JE Canyon Ranch’s landscape is dramatic with its large, sweeping tracts of shortgrass prairie, mesa tops with old growth pinyon-juniper, and red rock canyons with seeps, springs and perennial prairie streams. Jerry Wenger, owner of the ranch, was enthusiastic about its conservation potential. In June 2010, at Jerry’s invitation, CNHP and Denver Botanic Gardens organized a bioblitz at JE Canyon Ranch. Over 50 people attended and the results were staggering: 865 species documented in 24 hours!

Jerry Wenger had his ranch listed for sale on the private market for several years, hoping that the next owner would be conservation minded. TNC’s interest in purchasing the ranch, backed by the NatureServe Network’s identification of the ranch as among the most important biodiversity hotspots in the ecoregion, was a win-win situation. TNC’s plans include putting the entire ranch under a perpetual conservation easement and managing for prairie conservation while still operating the property as a cattle ranch.