Three global manufacturing companies—BMW Group, Tetra Pak and Schüco International—have signaled concern over the use of bauxite sourced from Ghana’s Atewa Forest for aluminum if mining has catastrophic and irreversible effects on the people and wildlife that depend on the forest. More than 5 million Ghanaians depend on Atewa Forest as their source of clean drinking water. 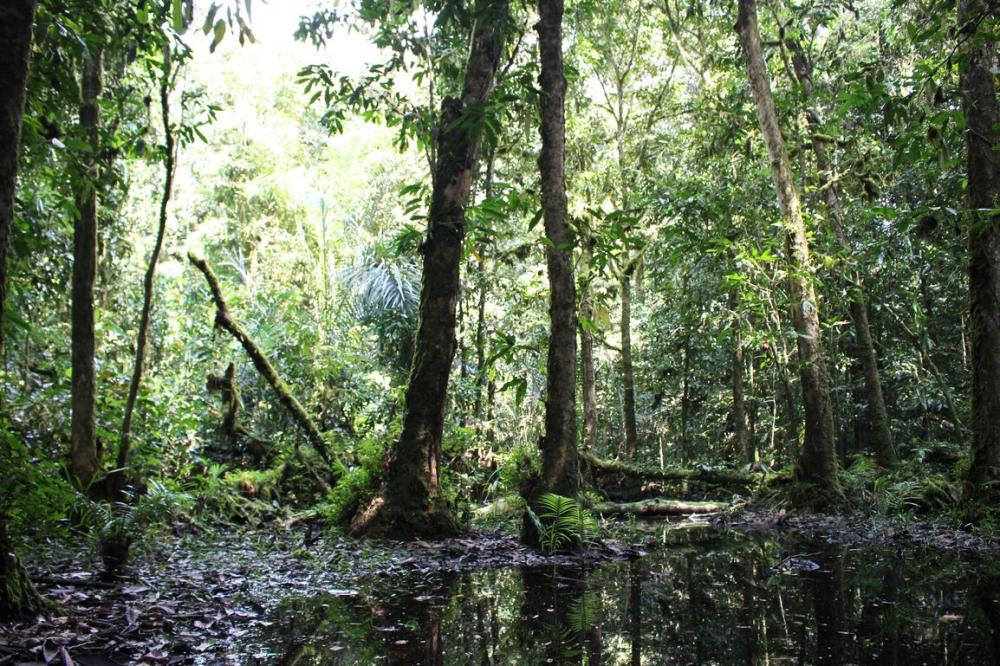 “Saving Atewa Forest from mining should be an intergenerational priority, and we are happy and grateful that big businesses in the aluminum value chain understand the importance of a healthy forest and the environmental services it provides,” said Oteng Adjei, president of the Concerned Citizens of Atewa Landscape (CCAL), the grassroots movement advocating against bauxite mining in Atewa Forest and the recipient of letters from all three companies. “We appreciate their commitment to supporting local and international efforts to secure Atewa Forest against bauxite mining that is certain to destroy the forest, its water services and biodiversity.”

BMW Group, Tetra Pak and Schüco International are all members of the Aluminium Stewardship Initiative (ASI), established to certify the production and supply of aluminum including bauxite extraction. The letters from the companies state:

Schüco: “Schüco would oblige our aluminum suppliers not to supply aluminum derived from bauxite mined in the Atewa Range Forest Reserve, and we intend to encourage other aluminum users to join us in this commitment.”

Tetra Pak: “Sourcing aluminum produced from bauxite mined in the Atewa Range Forest Reserve… presents a level of risk that is completely unacceptable to Tetra Pak. No matter how high the environmental standards that are applied, any form of mining at this site will have an unavoidable destructive impact on the values inherent in such a natural habitat.”

BMW Group: “Bauxite from the region of the Atewa Forest needs to be in line with the Convention on Biological Diversity, the UNFCCC Paris Agreement on Climate Change and Ghana’s voluntary national contributions towards the UN Sustainable Development Goals. If this is not the case the BMW Group will not accept aluminum in its supply chains that originates bauxite from the Atewa Forest.”

Campaigners to protect Atewa Forest have repeatedly insisted that purchasing bauxite mined from in the Atewa Forest would not meet ASI’s standards and that bauxite mining in Atewa would threaten species with global extinction, undermining the Convention on Biodiversity and the Sustainable Development Goals, both of which set clear targets to stop extinctions.

While the companies recognize the government of Ghana’s desire to develop the aluminum sector for economic development and poverty reduction, their letters make clear their commitments to sustainability. All three companies want their suppliers and sub-suppliers to meet their same social and environmental standards.

If bauxite from Atewa becomes part of Ghana’s aluminum supply, the Ghana Integrated Aluminium Development Corporation (GIADEC) risks outright rejection of all Ghana’s bauxite and aluminum by aluminum users such as these.

In late 2016, the Ghanaian government initiated plans to mine bauxite found beneath Atewa Forest as part of a financial deal with China. Extracting bauxite in Atewa would require ‘strip mining’ where the whole surface layer of soil is removed. This means a total loss of the forest in the mined areas, along with all the biodiversity it contains. In 2019, bulldozers started to clear trees and create access roads in Atewa Forest, even after a number of international groups, led by A Rocha, and local groups, now led by CCAL, had spent years urging the government to protect Atewa Forest in perpetuity by converting it into a national park.

Unlike Ghana’s existing bauxite mine at Awaso, which locals describe as a ‘desert of red mud’, Atewa Forest is teeming with life, home to at least 50 mammal species, more than 1,000 species of plants, at least 230 species of birds and more than 570 butterflies—including species found nowhere else in the world. Atewa is a Key Biodiversity Area, a site of global importance to the persistence of biodiversity and to the planet’s overall health. In a recent book, acclaimed biologist and author Professor E.O. Wilson lists Atewa Forest as one of the 38 most important places on Earth that should be set aside for nature’s benefit.

“Atewa’s incredible biodiversity and the ecosystem services it provides are priceless, and the local communities have been very vocal in their wish to protect this place from destruction,” said Daryl Bosu of A Rocha Ghana. “By trying to extract short-term monetary gain from the forest, the government is actually driving companies away from doing business with Ghana. It is time to invest in Atewa’s long-term protection, not only for the benefit of Ghanaians, but to the benefit of all life on Earth, which depends on our forests to help fight the climate crisis and prevent pandemics.”

In 2016, A Rocha and partners published a report that showed that protecting Atewa Forest as a national park and a buffer area around it—rather than mining it for bauxite—actually had the highest economic value for the country over 25 years, with tremendous benefits to communities both upstream and down.

The International Union for Conservation of Nature (IUCN) passed a resolution in November of 2020 demanding global action to save Atewa from bauxite mining, joining the international call to protect this irreplaceable forest. In addition to providing clean water to the communities around it, Atewa Forest is home to the endangered white-naped mangabey; the critically endangered togo slippery frog, and the critically endangered Afia Birago puddle frog, which was discovered in 2017.

“This defense of the Atewa Forest is significant in that it signals a change in the mentality of businesses, and this shift could not come at a more crucial time for biodiversity,” said Sean O’Brien, NatureServe CEO and President. “With more than one million species at risk of extinction, we urgently need more industry leaders who prioritize conservation by listening to local communities and science. Key Biodiversity Areas are a great tool for setting those priorities, and Atewa Forest is just one of many places that this designation could provide critical protection for.”

This press release comes from a group of global nature conservation organisations with the combined number of more than 15 million members and supporters worldwide.

NatureServe
For nearly 50 years, NatureServe has been the authoritative source for biodiversity data throughout the Western Hemisphere. To protect threatened biodiversity, NatureServe works with nearly 100 organizations and over 1,000 conservation scientists to collect, analyze, and deliver standardized biodiversity information, providing comprehensive spatial data to meet both regulatory and conservation needs. NatureServe and its network partners develop and manage data for over 100,000 species and ecosystems, answering fundamental questions about what exists, where it is found, and how it is doing. https://www.natureserve.org/

A Rocha
A Rocha International is a Christian organization engaging communities in nature conservation. A Rocha was founded in Portugal in 1983 and is now active in 22 countries on 6 continents, working to protect and care for vulnerable habitats and species, carry out environmental education and benefit local communities. https://www.arocha.org

Amphibian Survival Alliance
The Amphibian Survival Alliance (ASA) promotes the conservation of amphibians and their habitats through dynamic partnerships worldwide. ASA raises awareness of amphibians and their plight, and helps channel resources towards the implementation of vital conservation actions, as guided by the global Amphibian Conservation Action Plan. ASA works directly with the IUCN SSC Amphibian Specialist Group and Amphibian Ark to achieve the shared vision “Amphibians thriving in nature”. ASA champions the extraordinary work of its partners to build a strong, collaborative future for amphibian conservation. Learn more at www.amphibians.org and www.synchronicityearth.org

BirdLife International
BirdLife International is a global partnership of conservation organisations (NGOs) that strives to conserve birds, their habitats, and global biodiversity, working with people towards sustainability in the use of natural resources. Together there are over 100 BirdLife Partners worldwide – one per country or territory – and the partnership is growing. BirdLife is widely recognised as the world leader in bird conservation. Rigorous science informed by practical feedback from projects on the ground in important sites and habitats enables BirdLife to implement successful conservation programmes for birds and all nature. BirdLife’s actions are providing both practical and sustainable solutions significantly benefiting nature and people. www.birdlife.org

RSPB
The RSPB is the UK’s largest nature conservation charity, inspiring everyone to give nature a home. Together with our partners, we protect threatened birds and wildlife so our towns, coast and countryside will teem with life once again. We play a leading role in BirdLife International, a worldwide partnership of nature conservation organisations. https://www.rspb.org.uk/

Trillion Trees
Trillion Trees is a joint venture between BirdLife, WCS and WWF to urgently speed up and scale up the positive power of forests, helping the world protect and restore one trillion trees by 2050, and this effort supports that global vision. To learn more about how we're improving protection, advancing restoration and ending deforestation visit trilliontrees.org and follow us on Twitter @1TrillionTrees.

WWF
WWF is an independent conservation organization, with over 30 million followers and a global network active in nearly 100 countries. Our mission is to stop the degradation of the planet's natural environment and to build a future in which people live in harmony with nature, by conserving the world's biological diversity, ensuring that the use of renewable natural resources is sustainable, and promoting the reduction of pollution and wasteful consumption. Visit panda.org/news for the latest news and media resources; follow us on Twitter @WWF_media