Washington, DC, Mar 04, 2022 (GLOBE NEWSWIRE) — To prevent further declines in species threatened with extinction, conservation professionals need to know where those species occur. A study led by NatureServe with partners from Esri, The Nature Conservancy, and the NatureServe Network offers an unprecedented, fine-scale map of the places that matter most for sustaining our nation’s biodiversity. The study, published in the journal Ecological Applications, developed high-resolution distribution maps for over 2,200 species vulnerable to extinction, including, for the first time, a diverse set of plants, freshwater animals, and pollinators in addition to more well studied vertebrate groups such as birds, mammals and amphibians. When the geographical distribution of these at-risk species is compared to areas already set aside for conservation in the lower 48 United States, the authors found that nearly 300 imperiled species rely on habitat that falls completely outside of protected areas. Additionally, almost every one of the lower 48 states harbors specific areas with opportunities to take conservation action and prevent extinctions.

The Map of Biodiversity Importance leverages nearly 50 years of standardized biodiversity inventory, a national treasure of occurrence records for diverse imperiled species provided by the NatureServe Network. Analyzing these data with innovations in cloud computing, machine learning, and modern ecological modeling, the Map of Biodiversity Importance provides the first high-resolution view of where our nation’s most threatened species are found. Together with spatial data on private and public land ownership, these maps become what Dr. Healy Hamilton, Chief Scientist at NatureServe, describes as “a new tool for precision conservation that can reduce conflict and improve the effectiveness of management actions.” 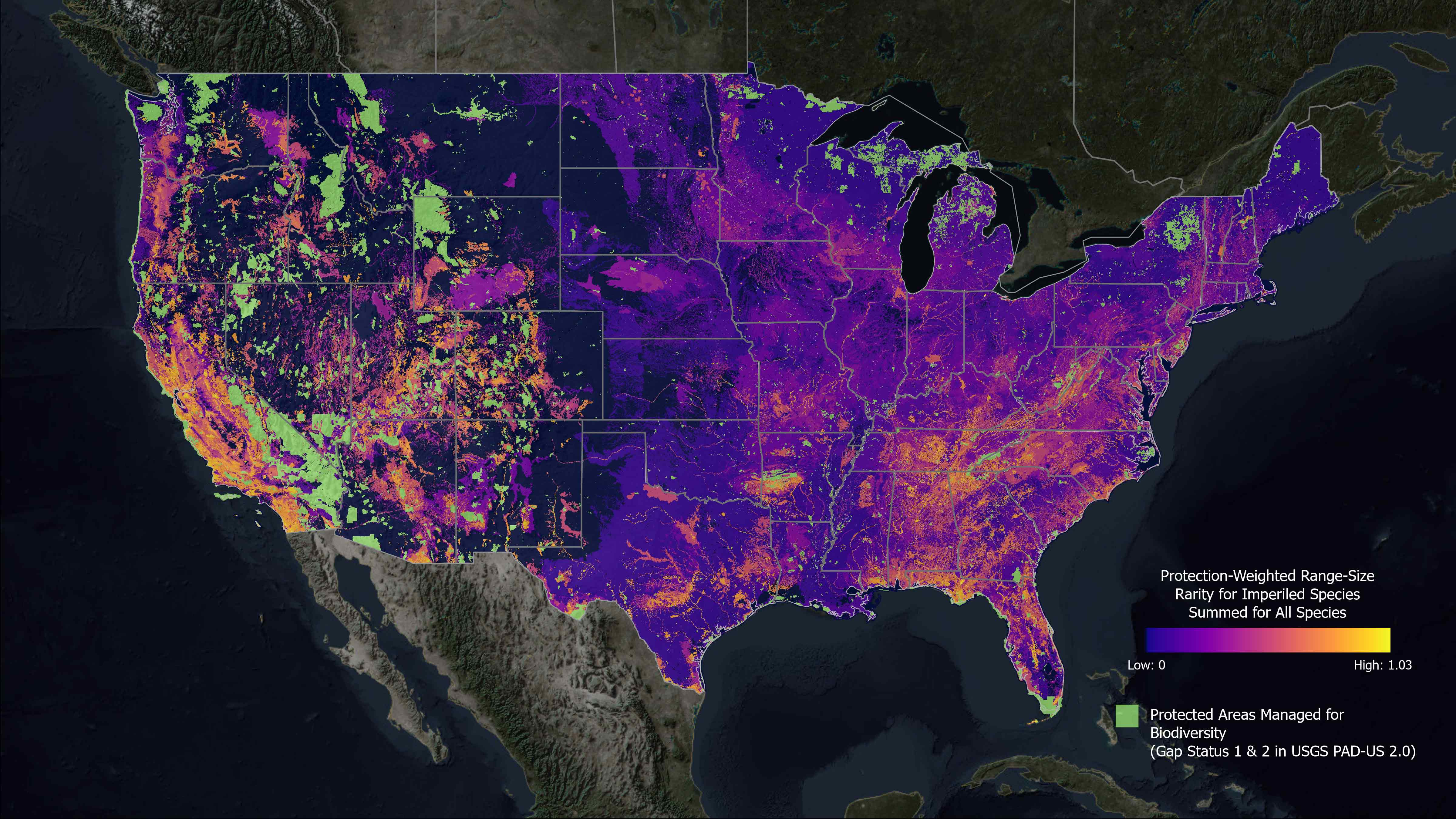 Map of Biodiversity Importance (Protection-Weighted Range Size Rarity for Imperiled Species Summed for All Species) This map displays richness of at-risk species outside of existing protected areas using modeled distributions for 2,216 of the most imperiled plants and animals in the United States. Brighter colors indicate where land and water protection will most benefit the least protected yet most threatened biodiversity in our nation. Inputs for the Map include habitat models for species listed as Endangered or Threatened under the Endangered Species Act or those that have been identified by NatureServe as Critically Imperiled (Global Conservation Status of (“G1”) or Imperiled (“G2”). The Map contains layers on four taxonomic groupings (vertebrates, freshwater invertebrates, pollinators, and vascular plants). Additional analyses are available in the ArcGIS Living Atlas of the World. Click to enlarge.

While traditional maps used for managing biodiversity are usually large-scale depictions of a species’ broad geographic range, the Map of Biodiversity Importance provides fine-scale maps of the most likely suitable habitat for thousands of imperiled species. Previous studies focused on the conservation needs of vertebrates, despite that vertebrates represent only a fraction of species diversity, many more plants are imperiled as compared to animals, and both plants and invertebrates are important to ecosystem function by providing nutrient cycling, water purification, and pollination services. This study is the first to use high-resolution maps for a taxonomically diverse range of species, including over 1,600 imperiled plants, and freshwater species such as mussels and crayfish. The results bring to light globally significant imperiled biodiversity that is traditionally overlooked, including plants of the Colorado Plateau and pollinators in the Southwest.

The findings presented in the Map of Biodiversity Importance can be used to make conservation efforts more effective and to reduce conflict with other land uses. The map highlights areas with concentrations of imperiled species with narrow ranges that fall outside of existing protected areas, helping local communities understand their natural heritage, and serving as a tool for use by state and federal agencies, land trusts, corporations, and private citizens for conserving and restoring biodiversity and avoiding incompatible land uses. “Being able to combine the MOBI data with land use and climate change models helps us identify parts of the landscape that have high biodiversity and are also threatened by future changes. Having that ability to calculate a conservation ‘return on investment’ for the most imperiled species is incredibly powerful,” said Dick Cameron, Director of Science for The Nature Conservancy’s Land Program in California.

Results also help to determine the highest returns on our conservation investments by connecting land management schemes to species status assessments. For example, of the 818 species from the study that occur on federal lands, over 85% are not currently protected under the federal Endangered Species Act, and 326 nonprotected, imperiled species occur on federal lands designated for multiple use. These findings highlight an essential responsibility of federal agencies to balance conservation needs with other land uses.

“When we think of biodiversity, we may reflect on tropical rainforests or coral reefs, where the richness of life is indeed staggering,” said Dr. Hamilton, “but our own country harbors globally significant biodiversity. The findings from the Map of Biodiversity Importance show us areas critical for preventing extinction across the nation.” The brightest colors on the Map (below) reveal where multiple threatened species occur outside of the lands and waters in the lower 48 states that are already designated for conservation. This information can be used to inform public-private partnerships such as Candidate Conservation Agreements and Habitat Conservation Plans.

“We want to inspire and empower more people and organizations to engage in conservation,” said Jack Dangermond, Esri founder and president. “The Map of Biodiversity is an outstanding source of information on exactly where those efforts would have the greatest impacts and is a great tool for making what used to be a large-scale endeavor accessible for everyone.”

One major finding is that areas in need of conservation investment are not concentrated only in recognized hotspots but exist across the country. “Most people are not aware that we have so many imperiled species in America, much less that almost all of us live close to a conservation hotspot for biodiversity. Our analysis shows that nearly 90% of Americans live within 30 miles of an area of high importance to biodiversity conservation. This past year has demonstrated humanity’s connection with nature and now we have a map for protecting the most vulnerable species in the United States" stated Dr. Sean T. O’Brien, President and CEO of NatureServe.

You can access the Map of Biodiversity Importance resources on NatureServe’s Hub site or Esri’s ArcGIS Living Atlas of the World.

Further findings from the Map of Biodiversity Importance can be found by visiting natureserve.org

“Our partnership with NatureServe leverages the strengths of local expertise and supports conservation priority setting both locally and for all of the contiguous United States. We are thrilled to be a part of this collaborative effort and to be contributors to such important work.” Timothy G. Howard, Ph.D., Director of Science, New York Natural Heritage Program

“This project allowed us to leverage the biodiversity data collected in the field by NatureServe Network scientists, here in Pennsylvania and across the country, to create the Map of Biodiversity Importance. This map not only serves to highlight national priorities, but is a valuable guide for PNHP and conservation efforts by our local partners.” Christopher Tracey, Conservation Planning Manager, Pennsylvania Natural Heritage Program

"The Virginia Natural Heritage Program was pleased to be part of this unprecedented endeavor that will lead to better understanding of where rare species occur throughout the conterminous United States and better, more-informed decisions related to conservation actions and proposed development projects." Joe Weber, Information Manager, Virginia Natural Heritage Program