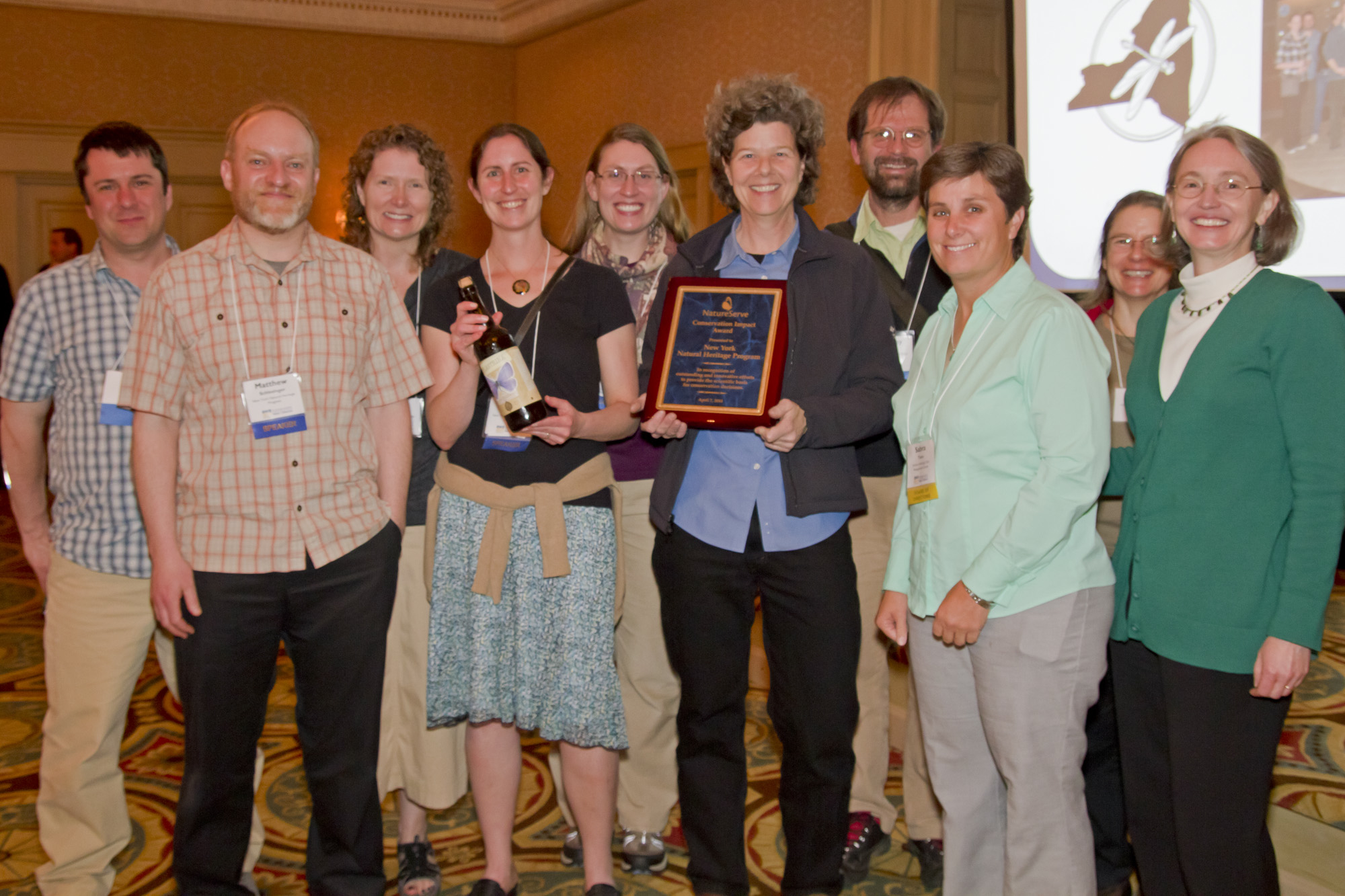 That impact has come most notably through two endeavors: the iMapInvasives tool and modeling of rare species locations.

The iMapInvasives tool has been indispensable for network programs tracking invasive species—which pose a dire threat to biodiversity everywhere—and expanding the variety of conservation data they manage. The system got its start in New York, when the state-funded natural heritage program partnered in 2007 with The Nature Conservancy, the Florida Natural Areas Inventory, and the Florida Resources and Environmental Analysis Center to develop an online database that could pull together existing data on invasive species and become the de facto tool for all natural resource managers working on the problem.

In New York, more than 500 citizen scientists are registered with iMapInvasives to track destructive invaders such as giant hogweed, emerald ash borer, and hydrilla.

“We have a really broad collaborative effort among many different state agencies, industry, and NGO partners—all across the state—working on invasive species issues and on early detection of new invasives coming into the state,” said DJ Evans, NYNHP’s director.

NYNHP also achieved significant conservation impact through their computer modeling and mapping work on rare species. They were a pioneer, and remain at the leading edge, of the technology for charting the potential distribution based on their known locations and using this information to find more populations of threatened flora and fauna. This is done through a complex analysis of more than 30 GIS-based data layers and statistical routines. Their use of “element distribution models” (also known as species distribution models or habitat distribution models) is key to prioritizing field inventory for rare species and significant natural communities. The eventual aim is to provide a version of such models as statewide potential habitat maps of nearly all of the rare species and habitats in the state.

Those models translate into conservation action by helping researchers find new places to search for endangered species. They can also be used to identify areas that could be set aside as future habitat for species, or as important travel corridors for species and populations that move around on the landscape. Many of the protocols other states use trace back to NYNHP’s groundbreaking work.

As an example, researchers have been able to identify sites that appear to be suitable for bog turtles, as well as sites to which bog turtle populations could move as a result of climate change.

They are also compiling a statewide atlas of dragonflies and damselflies and have played a lead role in the years-long effort to establish and document a new species of leopard frog in the mid-Atlantic.

One of NYNHP’s focuses moving forward will be on the impacts of energy development, and their role in providing objective information to inform both wind power development and natural gas exploration. They’ve recently partnered with the Nature Conservancy to work on the appropriate placement of wind turbines across the state.

“Both wind and gas development are going to be big in New York state, so we’re working on tools to help them be more environmentally sensitive in  siting wind farms, and we hope to be involved as gas development moves forward,” Evans said.

A team of NYNHP scientists were on hand to receive the Conservation Impact Award during Biodiversity Without Boundaries, the NatureServe Network’s annual conference.

“What it represents to me is that payoff for all our hard work. We set out on these projects—the species distribution modeling, iMapInvasives—hoping that we would have an impact on conservation and hoping that we would have an impact within the network, in providing things that can be used to increase the effectiveness of all of us. To me, that’s a huge thing,” Evans said. “The award is a measure of the hard work of not only our program but several other network programs we have collaborated with along the way in advancing the issues—climate change, energy development, invasive species—among all of our constituents.”

Established in 1985, NYNHP is a program of the State University of New York College of Environmental Science and Forestry and the New York State Department of Environmental Conservation.. Its mission is to facilitate conservation of rare animals, rare plants, and natural ecosystems. Its staff of 25 scientists and specialists have expertise in ecology, zoology, botany, information management, and geographic information systems.