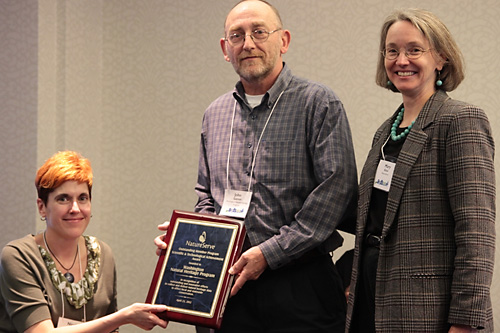 NatureServe's 2012 award for Scientific and Technical Achievement went to the Washington Natural Heritage Program, thanks to accomplishments that included raising public awareness and knowledge of the state’s rare plants; describing and documenting the state’s nearly 100 ecosystems; and increasing the rigor and transparency of efforts to document the ecological integrity of important natural areas.

Two recent projects have boosted the Washington Natural Heritage Program's effectiveness in maintaining and delivering information about Washington’s rare plants. A ten-year partnership with Rare Care, the University of Washington’s Rare Plant Care and Conservation Program, has leveraged innovations in citizen science to update and improve the information used in resource planning and management. Working with public agencies, the partners have trained volunteers to revisit sites where populations of rare species had previously been observed. Last year, program volunteers updated 186 population records for 91 species.

The work of WNHP ecologists Rex Crawford and Joe Rocchio has a major influence in how ecosystem-scale conservation is conducted in Washington, building upon the 2009 publication of the Draft Field Guide to Washington’s Ecological Systems, which classified and described nearly 100 ecological systems that occur within the state’s borders. These units, developed by NatureServe, are useful for mapping, assessing, and prioritizing habitat-level conservation.

More recently, WNHP ecologists have expanded on work done by NatureServe and the U.S. Environmental Protection Agency to assess the integrity of wetlands, developing Ecological Integrity Assessments (EIAs) for 67 of Washington’s terrestrial ecosystems. Advanced in collaboration with and with support from the Washington Department of Fish and Wildlife(WDFW) and the Washington State Parks and Recreation Commission, this standardized method provides a rigorous and transparent means of evaluating the condition of individual occurrences of ecological systems. WDFW has started using these EIAs as the basic framework for managing their lands toward ecological objectives. The EIA framework has also been adopted by the Arid Lands Initiative, a public-private conservation effort in eastern Washington involving more than 40 federal and state agencies and NGOs.

Other ecology-led initiatives include an update of data on the state’s high-quality wetlands, which the Washington Department of Ecology relies on for their wetland rating system (used in turn by counties to guide review and approval of development projects) and a collaboration with the state’s leading botanists to complete a state-wide Floristic Quality Assessment that judges the condition of individual sites based on plant composition.

“The Washington Natural Heritage Program is a recognized leader in guiding biodiversity conservation, and a critical member of our international network,” said Mary Klein of NatureServe. “The state of Washington is fortunate to have this program to guide its policymakers, resource managers and citizens towards the highest priority places and most efficient management options for conserving rare plants and ecosystems.”

The Washington Natural Heritage Program was established by the state Legislature in 1981 to provide an objective, scientific approach to setting statewide conservation priorities. The program, housed within the State Department of Natural Resources, compiles information on the state’s species and ecosystems and prioritizes them for conservation action. WHNP reviews and updates these statewide conservation priorities every two years and publishes the results in the State of Washington Natural Heritage Plan. These priorities, and information from the Natural Heritage database, are used by public agencies and private companies and organizations to help guide land-use decisions