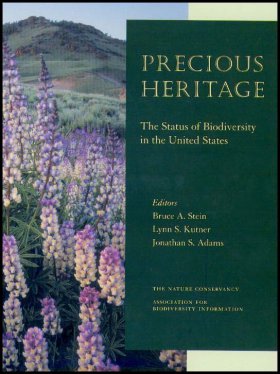 A vast land of contrasts, the United States harbors an extraordinary diversity of life, from the lush forests of Appalachia to the frozen tundra of Alaska, and from the Midwest's tallgrass prairies to Hawaii's rainforests. Precious Heritage reveals the nation's biological wealth in unprecedented detail, drawing together for the first time more than a quarter century of information from the network of state natural heritage programs. Sponsored by NatureServe and The Nature Conservancy, this richly illustrated volume not only documents the enormous breadth of U.S. species and ecosystems, but also considers how they are faring, what is threatening them, and what is needed to protect our nation's natural inheritance.

The United States emerges from this assessment as being far richer in species and ecosystems than previously thought, and as a global center of diversity for many life-forms.

Precious Heritage offers far more than a litany of losses, though, focusing instead on the considerable opportunities for conservation that still exist. Indeed, the detailed information on U.S. species and ecosystems that made publication of this book possible also provides a sound basis for setting priorities for conservation efforts.

Important biodiversity is found across the United States, but an innovative analysis of the nation's rarest species identifies several biological hot spots where conservation efforts will be particularly needed. Regions harboring exceptional concentrations of imperiled biodiversity range from the Hawaiian Islands and Florida Panhandle to California's central and southern coasts, and from the rivers of southern Appalachia to the deserts and springs around Death Valley.

To avoid squandering the country's biological riches will require a far more concerted and systematic effort than has characterized our nation's conservation efforts to date. Although a focus on individual imperiled species will often be necessary to stave off impending extinctions, conservation increasingly must be planned for and carried out at larger scales—from ecosystems and landscapes to entire regions. As a nation we must move beyond protecting the scenic "rock and ice" parks that characterized early conservation efforts, and turn our focus instead towards those often overlooked landscapes that are perhaps not as visually stunning yet are biologically spectacular. Several efforts to identify and protect such landscapes are already underway, and this volume offers a glimpse of these still-emerging blueprints for conserving the full array of the nation's rich natural heritage.

Precious Heritage provides a rigorous scientific assessment of the state of the nation's species and ecosystems, yet evokes the beauty, fascination, and mystery of the nation's living resources. Above all, the book is a celebration of the extraordinary biological diversity of the United States.