With tremendous biodiversity but increasing threats, Southeast Asia faces challenges in meeting its commitments to the Convention on Biological Diversity’s 2020 Aichi Targets. The use of indicators to monitor, evaluate and guide conservation progress is increasingly urgent.

We quantified indicator use by 10 Southeast Asian governments in the 4th and 5th national reports submitted to the Convention on Biological Diversity in 2010 and 2015. We found indicator use variable among nations but increasing. Use of quantitative trend indicators doubled from an average of 6–12. There was no change in the number of non-quantitative (mean of 2) or quantitative baseline indicators (those measured once; mean of 9). Indicators most frequently addressed habitat condition and extent, species diversity, protected areas, and agriculture (means of 2–6 indicators each). They were rarely used (mean ​< ​1) to indicate trends in wildlife exploitation, information sharing, climate change, and invasive species. Species diversity indicators increased from the 4th to 5th reports, and there were marginal increases in indicators used for aquatic ecosystems.

The results highlight a slow but noticeable increase in the use and quality of indicators in national biodiversity reporting in the region. However, for the region to accelerate progress towards agreed-upon targets of multilateral environmental agreements, a more relevant and diverse set of indicators will need to be employed. Paths to doing so include the use of disaggregated global indicators, increased regional coordination to improve the efficiency and quality of indicator generation, and increased efforts at growing national-level monitoring capacity.

Highlights of this report include: 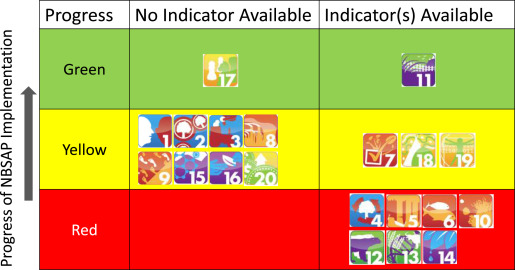