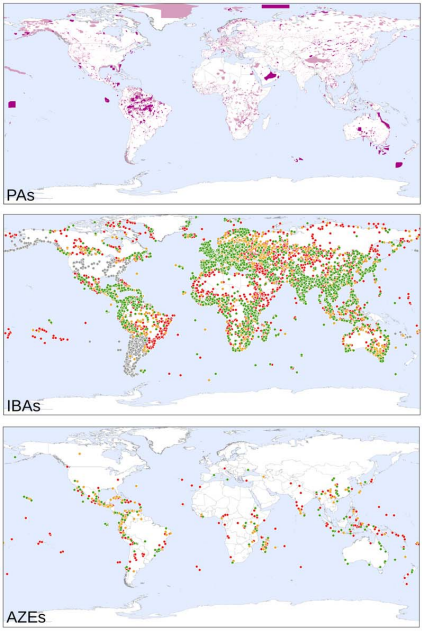 Protected areas (PAs) are a cornerstone of conservation efforts and now cover nearly 13 percent of the world’s land surface, with the world’s governments committed to expand this to 17 percent. However, as biodiversity continues to decline, the effectiveness of PAs in reducing the extinction risk of species remains largely untested. We analyzed PA coverage and trends in species’ extinction risk at globally significant sites for conserving birds (10,993 Important Bird Areas, or IBAs) and highly threatened vertebrates and conifers (588 Alliance for Zero Extinction sites, or AZEs). Species occurring in these sites with greater PA coverage experienced smaller increases in extinction risk over recent decades: the increase was half as large for bird species—with 50 percent of the IBAs at which they occur completely covered by PAs—and a third lower for birds, mammals and amphibians restricted to protected AZEs (compared with unprotected or partially protected sites). Globally, half of the important sites for biodiversity conservation remain unprotected (49 percent of IBAs, 51 percent of AZEs). While PA coverage of important sites has increased over time, the proportion of PA area covering important sites, as opposed to less-important land, has declined (by 0.45 percent to 1.14 percent annually since 1950 for IBAs and 0.79 percent to 1.49 percent annually for AZEs).

Thus, while appropriately located PAs may slow the rate at which species are driven towards extinction, recent PA network expansion has under-represented important sites. We conclude that better targeted expansion of PA networks would help to improve biodiversity trends.