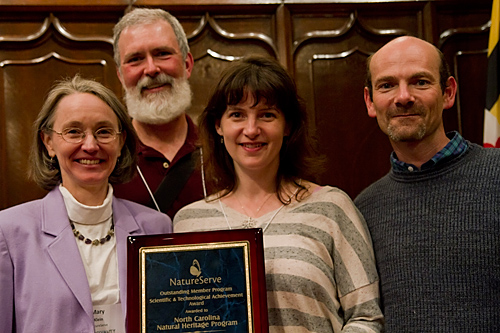 NatureServe’s 2013 Network Award for Scientific and Technical Advancement went to the North Carolina Natural Heritage Program (NCNHP)—one of three NatureServe network awards given out at the Biodiversity Without Boundaries conference for 2013.

The honor recognizes NCNHP’s achievements in revising its process for ranking biologically significant sites between 2011 and 2012. Through this effort, they established conservation priorities among more than 2,500 Significant Natural Heritage Areas (SNHAs) previously identified in statewide field investigations. The revised rating system represents a new application of NatureServe’s core methodology, enabling other NatureServe network members to replicate and extend it at global, national, subnational, regional, or county scales.

“After consulting with staff from other network members, we identified the lack of a consistent method for rating sites,” said Misty Buchanan of NCNHP. “By developing this new method for rating North Carolina’s SNHAs, we have added to the value of our existing knowledge while reflecting the core values of the network.”

SNHAs are areas of land or water that represent NCNHP’s estimates of the best locations (both protected and unprotected) for supporting the state’s natural diversity—which highlights the importance of ranking and prioritizing their degree of importance for conservation.

Under this approach, each SNHA receives two significance ratings that measure different but complementary values. The Collective Value Rating (C1-C5) reflects the number and rarity of species and habitats contained within a given site, while the Representational Rating (R1-R5) reflects the site’s importance in protecting the state’s best occurrences of individual species and habitats.

In addition to developing the rating method, NCNHP staff gained approval from its advisory committee, solicited input from key partners, applied the ratings to all 2,500+ SNHAs, reviewed the results of the rating methods, distributed spatial data of the results with 280 statewide partners, and shared the methods and ratings in a wide array of presentations, workshops, and discussion groups to ensure understanding and acceptance. GIS data containing the rating and are available for free download from NCNHP.

“This award is a tribute to the monumental effort and achievement of the North Carolina Natural Heritage Program in developing this site-based rating system,” said Mary Klein, president and CEO of NatureServe.

North Carolina Natural Heritage Program is part of the Office of Conservation, Planning, and Community Affairs within the N.C. Department of Environment and Natural Resources. The program serves as an information clearinghouse in support of conservation of the rarest and most outstanding elements of natural diversity in the state. These elements of natural diversity include plants and animals, which are so rare or the natural communities which are so significant that they merit special consideration as land-use decisions are made. Learn more at www.ncnhp.org.