The Index (“HCCVI”) is a framework for a series of measurements to determine how vulnerable a given natural community or habitat type might be to climate change. We use available data and expert knowledge in series analyses for climate change exposure (ecological stress caused by of climate change), and resilience (the ability to cope with ecological stress and avoid collapse). This framework and method serves as a habitat-based companion to the NatureServe Climate Change Vulnerability Index for species.

In 2019, NatureServe completed an assessment of 52 major vegetation types in the Western United States. You can read the report and explore the data through an interactive map viewer by following the links below, and find more information at the bottom of this page.

Explore the data for the current time period (as of 2014) 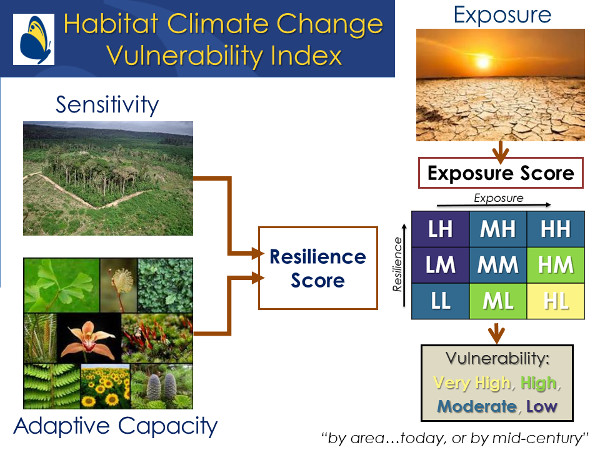 Land managers need a better understanding of factors that contribute to climate-change vulnerability of natural community or habitat types to determine the right management responses. Where climate change vulnerability can be foreseen as low to moderate, responses might take the form of maintaining current high-quality conditions or restoring ecological processes that have been altered. Where near-term climate change stress is most severe, they may consider how to facilitate most likely ecological transformations while minimizing biodiversity loss. By focusing on major natural community types within a given region, pragmatic strategies can be identified for application across multiple, neighboring managed lands.

The HCCVI aims to implement a series of measures addressing climate change exposure and ecological resilience for each community type as it varies across its distribution. Since quantitative estimates may not be feasible for all measures, both numerical index scores and qualitative expert categorizations may be used. Index measures are organized within categories of Exposure, and Resilience, with Resilience further broken down into those for Sensitivity, and for Adaptive Capacity. The combined relative scores for exposure and resilience determine the categorical estimate of climate change vulnerability for a given time-period (e.g., 50 years into the future).

Climate Change Exposure – This includes climate change stress and its likely effects on ecosystem-specific processes. These analyses include the identification of baseline climate conditions, including historical climatic variability, and future climate projections, including their departure from historical conditions. Where possible, changing climate variables are connected to dynamic processes, such as wildfire, hydrology, sea level rise effects.

Climate Change Resilience – This includes the capacity of a system to absorb disturbance and reorganize while undergoing change to still retain essentially the same function, structure, identity, and feedbacks.  For the HCCVI framework, we have broken measures into two categories of Sensitivity and Adaptive Capacity.

Sensitivity – This includes human alterations affecting ecological resilience. Analyses consider alterations to natural pattern and process, such as landscape fragmentation, effects of invasive species, or human alterations to dynamic processes. These human alterations are considered here independently of climate change, but likely interact with changing climate. These analyses could also include a temporal dimension, considering both legacies of past land use along with current or predicted future conditions.

Adaptive Capacity – This includes natural characteristics that affect the potential for resilience with a changing climate. Analyses consider aspects of natural species composition, such as the relative diversity within groups of species that provide critical functional roles (like nitrogen fixing species), or the relative vulnerabilities of individual species that provide “keystone” functions (“ecological engineers” like prairie dog or beaver). They also consider natural variability in microclimate or geophysical diversity and how that varies across the distribution of a given natural community type.

Example from the U.S. Intermountain West

Inter-Mountain Basins Big Sagebrush Shrubland occurs throughout much of the western U.S., typically in broad basins between mountain ranges, plains and foothills between 800 and 2500 m elevation. Soils are typically deep, well-drained and non-saline. These shrublands are dominated by Basin Big Sagebrush and Wyoming Big Sagebrush, with grasses like bluebunch wheatgrass, Indian ricegrass, blue grama, Idaho fescue, or needle and thread grass. In these landscapes, temperatures fluctuate widely each day, and across seasons, and much of annual precipitation falls as snow, with frequent growing-season drought.

Ecological interactions of climate, herbivory, and wildfire result in complex patterns of vegetation structure and species composition. Increasing fire frequency and severity can eliminate shrubs from the stands, as Big sagebrush does not sprout after fire. Conversely, in the complete absence of fire, deep-rooted shrubs can shade out native grasses. At higher-elevation sites with less frequent wildfire, conifers trees and shrubs like pines and junipers may invade and eventually displace sagebrush.

Over time, these shrublands have been converted for agriculture in some areas, but for the most part, livestock grazing has been the common land use and fragmentation by rural road networks is common. Overgrazing has often resulted in the loss of native bunchgrasses and been accompanied by wildfire suppression. The introduction of invasive annual grasses has resulted in large and frequent fires that support their further expansion. Vast areas of these shrublands have been severely altered by the introduction of invasive cheatgrass.

Applying the HCCVI to these shrubland includes use of maps and expert analysis for climate exposure, and resilience.

Climate Exposure measures used 30-year averages of 19 common temperature and precipitation variables projected to the mid -21st century and compared them against their averages measured during the mid-20th century. This resulted in a relative exposure map highlighting areas of greatest expected climate stress to these shrublands in the Central Great Basin, Snake River Plain, and Colorado Plateau. Warming climate with more frequent droughts weakens big sagebrush shrubs and eliminates recruitment. Additionally, warmer/drier fuels may result in more frequent fires that could increase rate of loss of mature stands through conversion of these shrublands to annual grasslands that are adapted to frequent fire.

Resilience measures included those for Sensitivity, encompassing landscape fragmentation, invasive plant species abundance, and alteration to natural wildfire patterns. Maps of these factors indicate locations throughout the West where current conditions of these shrublands is impacted by prior land uses, contributing moderate-high scores for Sensitivity. Adaptive Capacity measures included evaluation of different functional species groups (soil crusts, nitrogen fixing plants, seed dispersers) and these vary from high in some and low in others.  Microclimate and geodiversity is moderate, as this type occurs in a broad range of topographic settings.

Looking out to the 2040-2070 timeframe, overall vulnerability for this shrubland type vary from low in some places to moderate and high in others. Driven both by measures of climate change exposure and sensitivity, moderate to high climate change vulnerability is anticipated for several large ecoregions, including the Snake River Plain, the western and eastern portions of the Central Basin and Range, and eastern Columbia Basin.